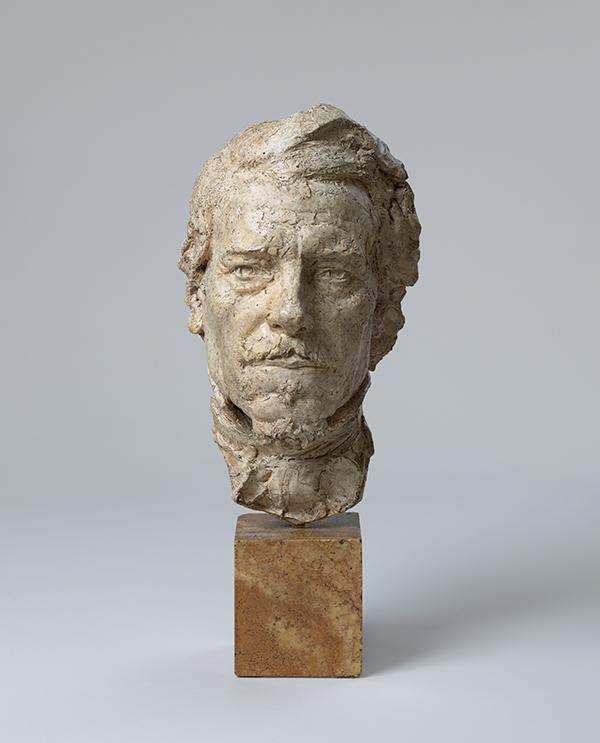 This sculpted portrait of Eugène Delacroix acquired by the museum in 2019 is a preparatory study by Félix Desruelles for a state commission of a bust in 1893. It joins the other sculptural representations of Delacroix already on display at the museum (busts by Carrier-Belleuse, Étex, Dalou), but differs from them by its freer execution.

A bust for Versailles

Félix Desruelles entered the École des Beaux-Arts in Paris in 1883, and trained as a sculptor in the workshops of Alexandre Falguière and René Fache (1865–1943). In 1893, he was the runner up for the Prix de Rome in sculpture. That same year, he was awarded an official commission, having won the personal support of the Minister of Finances’ wife, Marie-Noémi Rouvier, who was a sculptor herself. On 19 April 1893, the Ministry of Public Instruction, Fine Arts and Worship entrusted Félix Desruelles with the creation of a marble bust of Eugène Delacroix for the Château de Versailles, where it remains today. At that time, the curator of the Musée de Versailles, Pierre de Nolhac, was pursuing an ambitious policy to reorganize the collections and acquisitions on the theme of French history. The commission of a bust of Delacroix was part of this initiative. The form—a marble bust on a pedestal base—and the choice to present Delacroix decorated with the French Legion of Honour officer’s rosette give the finished piece a very official feel. By the late 19th century, Delacroix was considered one of the great men of the nation.

The piece acquired by the Delacroix museum, however, offers a different perspective on this official bust. It is a studio work, showing one of the preliminary stages in the sculpture process, done well in advance of the final marble piece. As shown by its uneven surface, the plaster cast captured the vivacity of the clay model shaped with the sculptor’s fingers. It is a mask and not a full bust : at this early stage in the process, the sculptor was concentrating his efforts on modelling the painter’s traits, saving the easier part of the work (modelling the upper body and back of the head) for later, or perhaps for an assistant.

When Desruelles received the commission for this bust, Delacroix had been dead 30 years. It was no easy feat : contrary to the custom of the time, the painter had formally refused to allow his features to be cast after his death. There was nothing depicting the artist’s face in relief. Desruelles most likely worked from painted self-portraits and above all photographs. He may also have drawn inspiration from the portrait of Delacroix photographed by Victor Laisné in 1852. The painter was around fifty years of age at the time of the portrait ; the photograph shows him at the height of his fame, with a serious expression, lips pressed together, just as he is portrayed in Desruelles’s work.