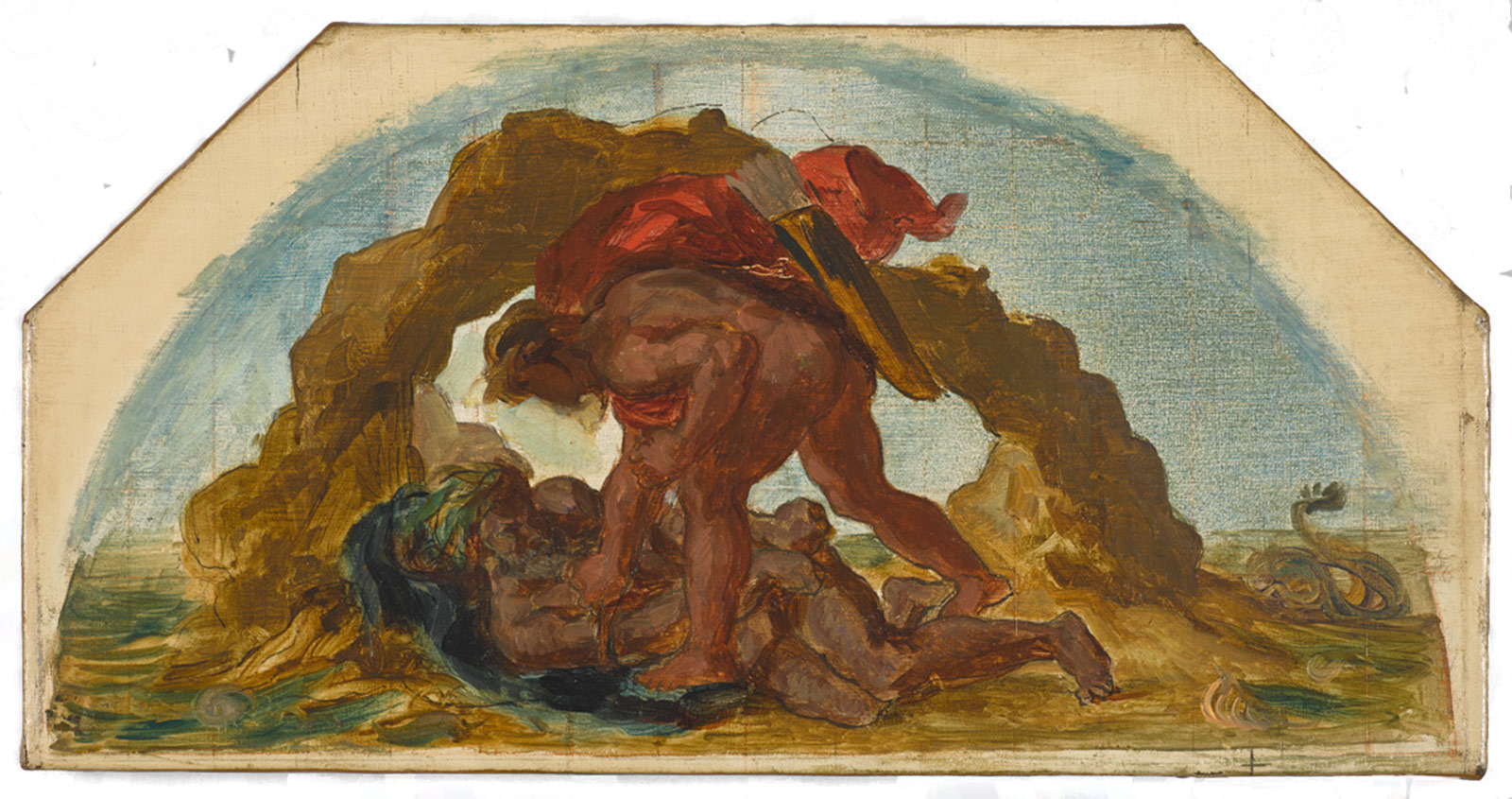 Eugène Delacroix (1798–1863) was commissioned in early 1852 to create a set of designs to decorate the Salon de la Paix of the Hôtel de Ville in Paris. He painted a scene based on the theme of Peace Descending to Earth for the ceiling, classical gods and goddesses for eight chambers, and episodes from the life of Hercules for eleven tympanums around the doors and windows. The finished look—the last project undertaken by Delacroix for a public building—was inaugurated in 1854 but was unfortunately destroyed in a fire in 1871.

An episode from the life of Hercules

Delacroix made the unusual decision to represent episodes of the life of Hercules rather than his twelve labours. This scene occurs just before the eleventh labour. Hercules binds or chains down Nereus—the old man of the sea who can change shape to a lion, snake and so on—to get him to reveal the location of the garden of Hesperides, from which he wants to steal some golden apples. The characters wrestle in front of a large vault-shaped rock, which frames their bodies.

Delacroix as an interior decorator The shape of the contour of the sketch for Hercules Binds Nereus mirrors that of the architectural feature the work was intended to adorn : an arched tympanum. As part of his creative process, Delacroix used the painted sketch to help him lay out the main structure of the final painting. In just a few brush strokes, he designed the stone arch and a little marine monster. We can still see traces of the squaring grid he drew to help him scale up the painting.

As the Musée Delacroix is housed in the painter’s final studio, works that bear witness to the creative and preparatory process carried out in a studio are of particular interest to the museum. Some of the most remarkable examples are the paintings made to plan out grand interior designs. The collection already includes another sketch for the Salon de la Paix : Hercules Bringing Alcestis Back from the Underworld, which was gifted by Jean-Pierre Galland in 2018 (and two copies by Pierre Andrieu [1821–1892], who worked with Delacroix on the room). Two models for the libraries of the Palais du Luxembourg and Palais-Bourbon are also held by the museum, titled Alexander Commanding that Homer’s Poems be Secured in a Gold Casket and Orpheus Comes to Civilize the Still Savage Greeks and to Teach them the Arts of Peace respectively.

Hercules Binds Nereus shows us how Delacroix approached grand interior designs and is a rare record of this décor since destroyed.

A work of prestigious origin

Eugène Delacroix kept this painting with him in his studio until his death in 1863. It later joined some significant private collections, including those of Gustave Arosa, Paul Arthus Chéramy and the German Impressionist painter Max Slevogt (1868–1932), who was a great admirer of Delacroix. Although it was mentioned in the catalogues raisonnés of the painter, it was known only by a photograph of a sales catalogue dated 1878.