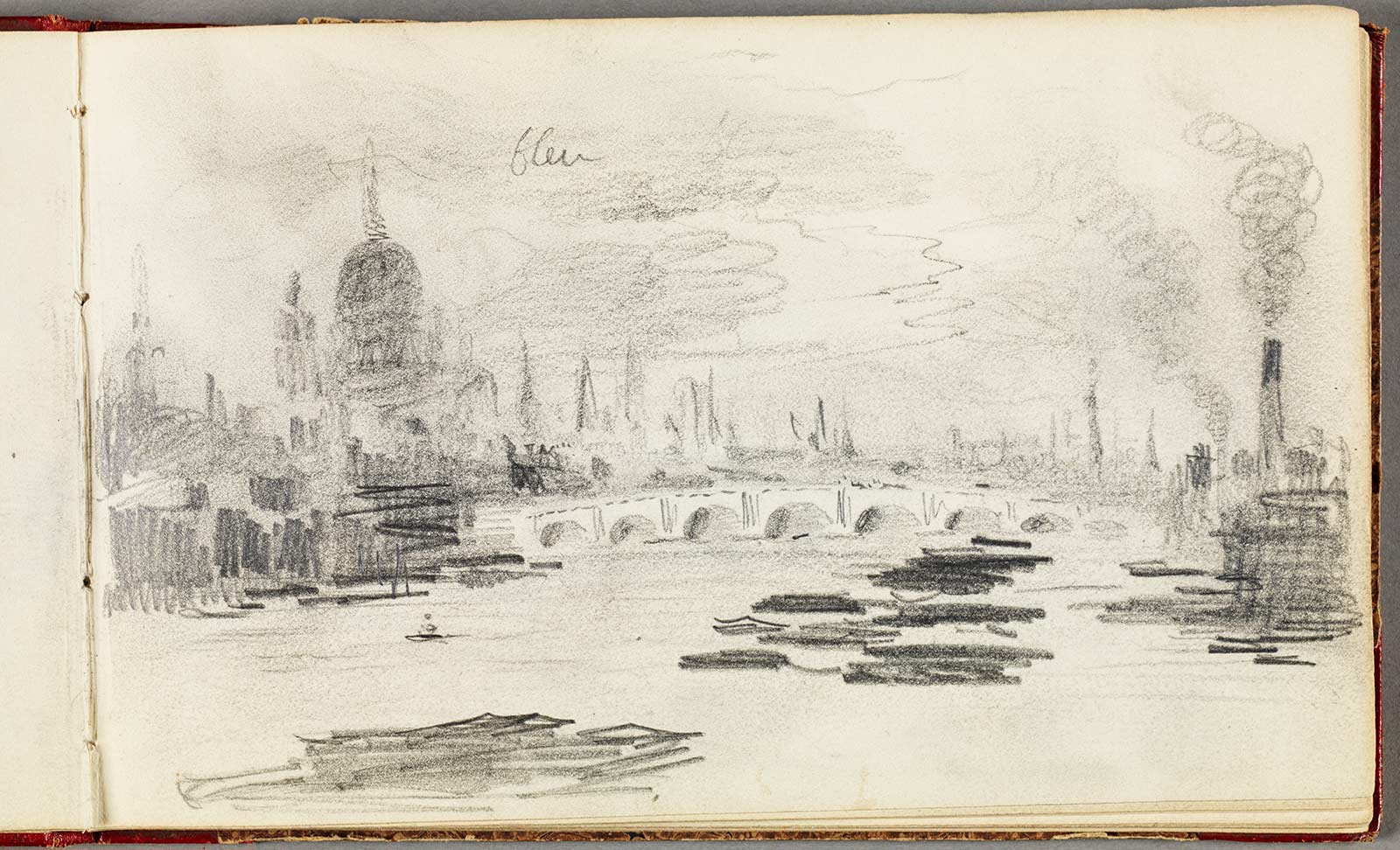 From May to August of 1825, Delacroix undertook a journey in England, over the course of which he filled several notebooks with drawings and handwritten notes. Three of these were found: one had been held by the Musée du Louvre’s Department of Prints and Drawings since 1927; the other two are now at the Musée Delacroix. The notebooks shed valuable light on this trip, which was one of the painter’s only sojourns abroad, along with his 1832 journey in Morocco. A key destination for a Romantic painter, England was a lasting source of inspiration for Delacroix.

Like many of his contemporaries, as a young man Delacroix was fascinated by all things English. In his youth, he was taught English by his friend, Charles Soulier, and became friends with a group of Englishmen working in Paris, namely—Richard Parkes Bonington and the three Fielding brothers —Thales, Copley and Newton. A great lover of literature, he read Sir Walter Scott’s novels, Lord Byron’s poems and Shakespeare’s plays. In 1824, he discovered Constable’s work, to which he immediately connected, and shared a studio with Thales Fielding prior to the Englishman’s return home. The Musée Delacroix houses their reciprocal portraits from this period: Portrait d’Eugène Delacroix by Thalés Fielding and Portrait de Thalès Fielding by Eugène Delacroix. . In 1825, everything would conspire to turn Delacroix’s gaze to England.

Upon the invitation of Thales Fielding, who had found lodgings for Delacroix, the artist landed in Dover on May 19, 1825. A day or two later, he arrived in London. Disappointed at first, he eventually became intrigued by the city’s port activity, drawing a great many boats and views of the Thames crisscrossed by bridges: the depiction of the old Blackfriars Bridge, dominated by the imposing silhouette of Saint Paul’s Cathedral, is one example. The vastness of this city is inconceivable. The bridges over the river go on endlessly. […] The banks of the Thames are charming, he penned to his friend Jean-Baptiste Pierret on May 22, 1825. The pages of his notebooks also contain a great many views of parks—the images of controlled, enclosed, peaceful nature: St James, Green, Hyde and others. [The] banks of the Thames […] are a never-ending English garden […] he wrote to Pierret on August 1, 1825. Delacroix also used this journey in England as an opportunity to learn to ride horses, filling his notebook pages with numerous studies of the animals.

The voyage undertaken by Delacroix was first and foremost an artist’s journey. The drawings and handwritten notes in his notebooks provide information on the collections he visited and the contacts he made. [R]equest to see the downstairs room where the antiquities are held at Sir Thomas Lawrence’s home, he scrawled on a page. Having paid a visit to Samuel Rush Meyrick, a historian of European arms and armor, and owner of perhaps the most impressive collection of armor that ever existed (letter to Théophile Thoré, November 30, 1861), Delacroix wrote: ask Dr. Meyric [sic] which would be the suits from the Richard III—Louis XI periods/[…] and which for Ivanhoe. Visiting the British Museum on several occasions, he was truly stunned upon seeing the Parthenon sculptures, as illustrated by several pages of notebook. His encounter with the ancient marbles, of which he made several sketches in graphite, made a deep impression on the artist.