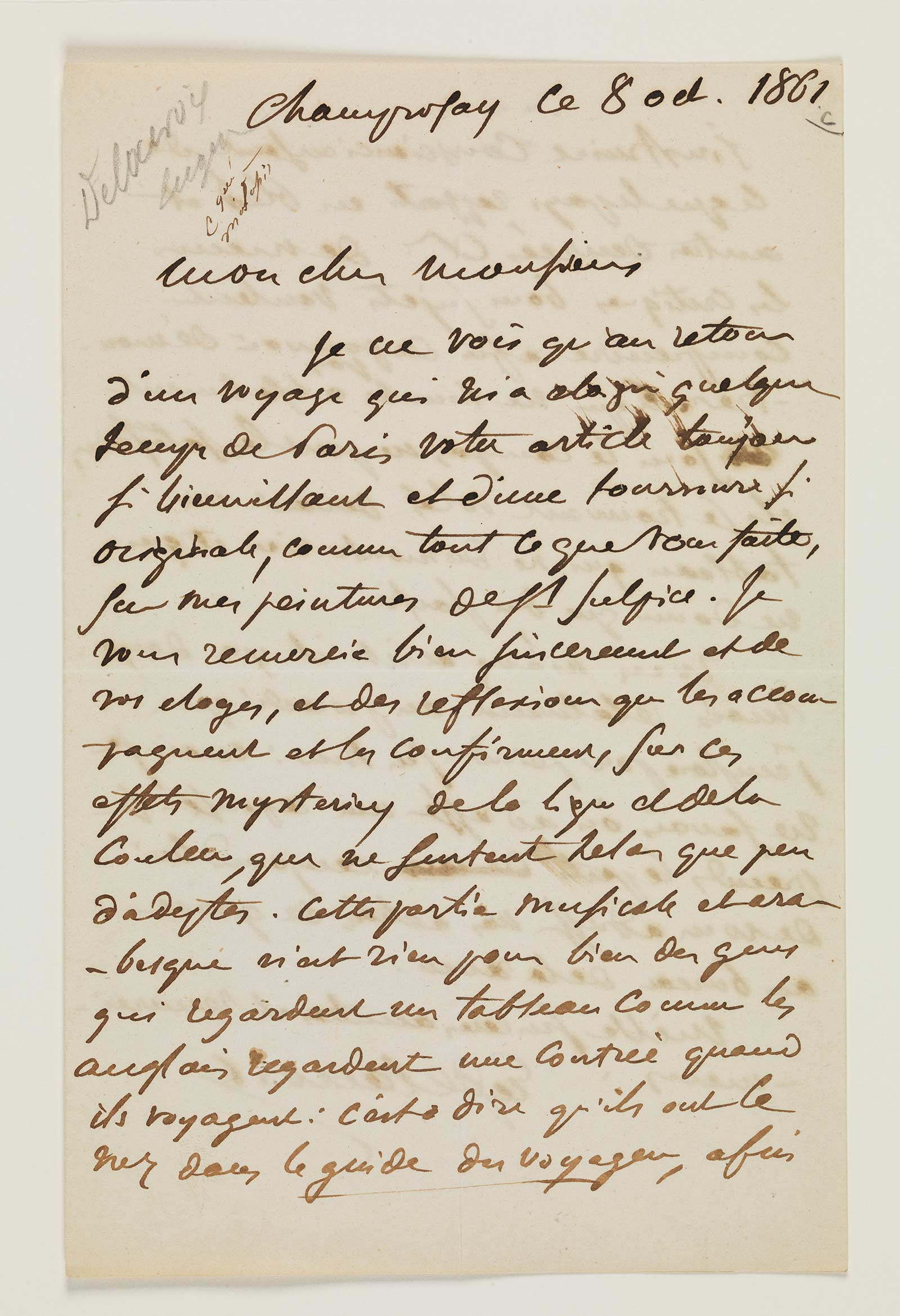 In the summer of 1861, Eugène Delacroix celebrated the completion of the décor of the Saints-Anges chapel in the church of Saint-Sulpice, for which he had been commissioned in 1849, and to which he had wholly devoted himself since 1856. Friends, critics and journalists were invited for a preview, and Baudelaire, who in all likelihood was not on the list, nevertheless wrote a highly flattering article, published on September 15, 1861 in the Revue Fantaisiste, for which Delacroix thanked him on October 8. Acquired in 2018, this letter supplements the Musée Delacroix’s collection of sketches, studies, models and texts pertaining to the Saint-Sulpice paintings, so showing the connection between the work and the studio on Rue de Furstemberg, where it was created.

Baudelaire and Delacroix, Between Admiration and Distance

It is difficult to grasp the relationship between Delacroix and Baudelaire, as documents and accounts are rare. The poet deeply admired the painter, drawing many of his aesthetic principles from his peer. Their few surviving exchanges display polite cordiality devoid of effusion. Their face-to-face encounters are said to have been no warmer, as noted by several of their friends, and in particular, Théophile Silvestre, according to whom Baudelaire’s unusual appearance, while wholly harmless alarmed Delacroix. Unusua: the painter used this same term in his letter to describe Baudelaire’s text, which he had just read:your article […] of such unusual structure, like all your writing…. These words may attest to his surprise, or the distance he prudently took from the poet’s positions.

And yet, Delacroix demonstrated sincere interest in the poet and critic, whose astute discernment he appreciated. In this letter, he thanks him for his flattering and kind .He makes no comment on the first part of the text, in which Baudelaire described the subjects featured in the décor, quoting the Bible at length. The second part of Baudelaire’s text—devoted to these mysterious effects of line and color, which, alas, are only appreciated by few enthusiasts made a much stronger impression on the artist. It was this perceptive analysis that set Baudelaire apart from most spectators : This musical, arabesque section is nothing for a great many people who look at a painting like the English look at the land while travelling: they have their nose in their travel guide, in order to conscientiously learn about what the country yields in terms of wheat and other commodities, etc.

In his article, Baudelaire lashed out at the class of materialistic and uncouth minds only able to appreciate objects for their contours, or, worse yet, their three dimensions—length, width and depth—exactly like savages and peasants . In contrast, he had praised the preternatural delight delight’ of the coloring and the arabesque in Delacroix’s compositions, reaffirming the balance of line and color: These two abstractions derive their equal nobility from a single source. His words thus echoed statements made by Delacroix in 1829 on the subject of art critics, whose dogmatic and sectarian discourse the artist found regrettable: ‘[They] endlessly debate which of drawing and color takes precedence, whether song should come before harmony, whether composition is the foremost of qualities. […] Curious people, who apparently view nature as proceeding in fragments as they see fit, displaying a bit of this, cutting away elsewhere by convenience […]. This letter from Delacroix to Baudelaire thus reveals the deep aesthetic affinities between the poet and the artist—two ardent critics of dogmatic assessments in the realm of art.