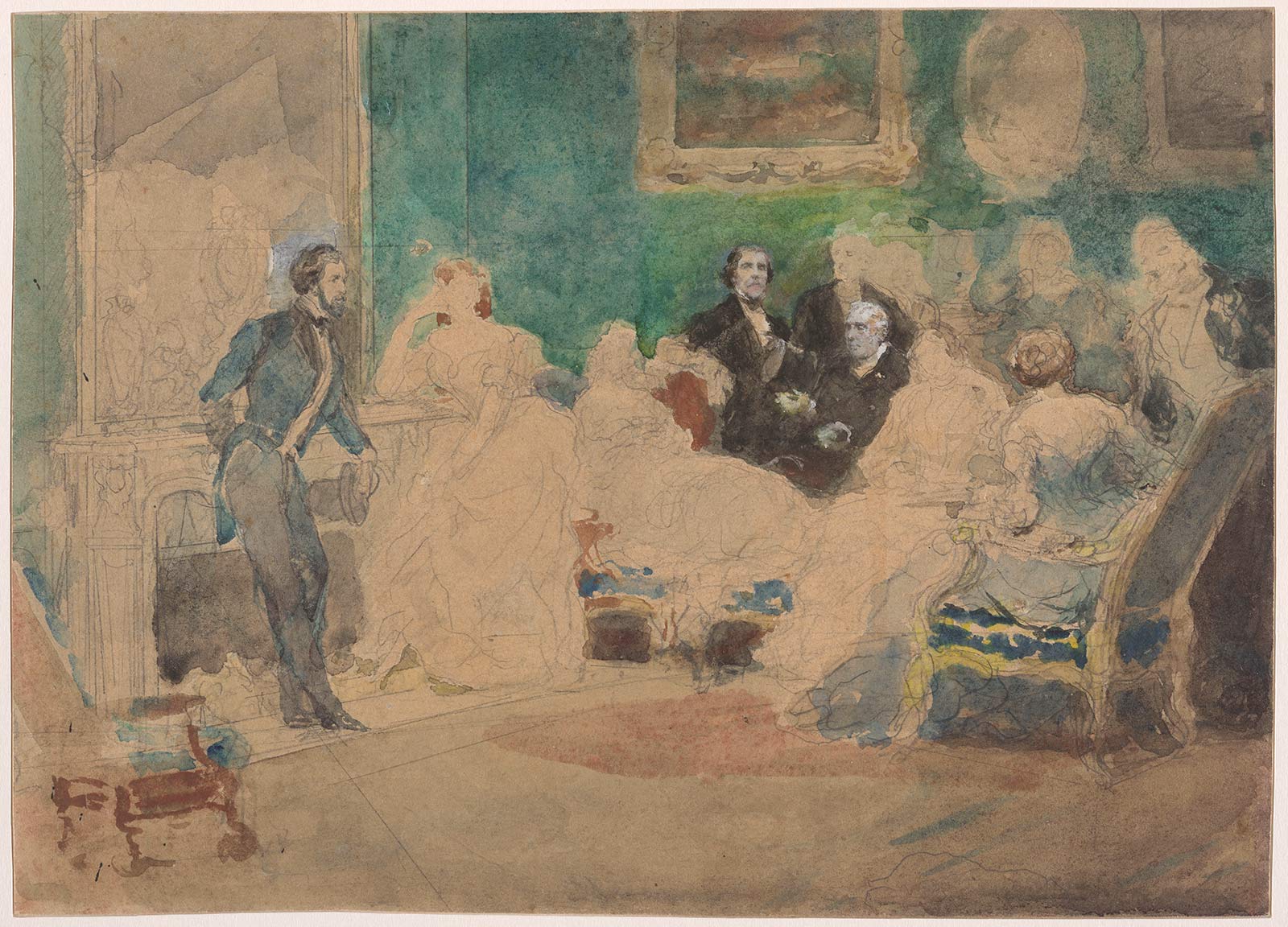 Although he had ties to the Royal Family of Orléans and the July Monarchy, Eugène Lami (1800–1890) nevertheless continued to sketch society life under the Second Empire, using his favourite technique, watercolour. In this unfinished drawing, a preparatory sketch for another watercolour (held in a private collection), the artist depicts a Parisian salon with three identifiable figures : the painter Eugène Delacroix, the poet Alfred de Musset (1810–1857) and the lawyer and politician Pierre-Antoine Berryer (1790–1868) who was a cousin to Delacroix.

An inscription on the back of the mount suggests that the scene takes place in the home of Marquise Adeline de Lagrange (1800–1878). A close friend of Berryer, she is mentioned on several occasions in Delacroix’s journal and in his correspondence with Berryer (some 160 letters held at the Musée Delacroix). Delacroix, Berryer and the marquise met regularly in Paris, but also in Augerville, during the summer, at the estate where Berryer liked to receive friends.

A renowned orator, Berryer is shown in the centre of the composition, captured in mid-conversation as he gestures with his hands. Delacroix stands beside him with a stately demeanour, his gaze fixed straight ahead, looking out over the audience with the distance and reserve his contemporaries often remarked upon. On the left, leaning against the lintel of the fireplace, his right arm bent behind his back, top hat in hand, Alfred de Musset is chatting with a young woman. He is wearing an unbuttoned blue tailcoat that reveals his tall and slender build. His presence here can undoubtedly be explained by the warm friendship extended to him by Berryer. While Musset was not as close with Delacroix, who had little appreciation for his poetry, the painter and the poet had known one another for some time : in the 1820s, they both attended Charles Nodier’s gatherings at the Arsenal Library, Alfred and Caroline Tattet’s salon, and other Romantic circles.

These figures all had ties with one another, but also with the man who drew them. Delacroix and Lami had known each other since they were young. In the 1850s, they both sat on the Paris municipal council. Lami was also very close to Alfred de Musset, having illustrated a number of his poems and plays ; he was often received by Caroline Jaubert, who was De Musset’s mistress, a great friend of Berryer… and Marquise de Lagrange’s sister-in-law.

This friendly little meeting takes place in a refined home that shows Eugène Lami’s interest in decoration and furnishings (Lami worked on several occasions as a decorator for the Orléans family). The cosy setting, which seems more aristocratic than bourgeois, is a theatre for rather old-fashioned practices of sociability that give priority to wit and elegance.

Dating of this watercolour can be deduced between 1852 —the year Eugène Lami returned from England —and 1857, the year of Alfred de Musset’s death, which is consistent with the references in Delacroix’s journal to dinners at Mme de Lagrange’s home, as well as the appearance of the figures depicted. It has always remained in Eugène Lami’s family. It belonged to Albert Guillaume (1873–1942), painter and illustrator of Parisian society during the Belle Époque and the interwar period, whose sister, Marie-Louise Guillaume, had wed Eugène Lami’s son. Eugène Lami was also a friend of architect Édmond Guillaume (1826–1894), who was Albert Guillaume’s father. Conservation work on this drawing revealed a preparatory sketch in graphite pencil on the back.