Mary Magdalene in the Desert 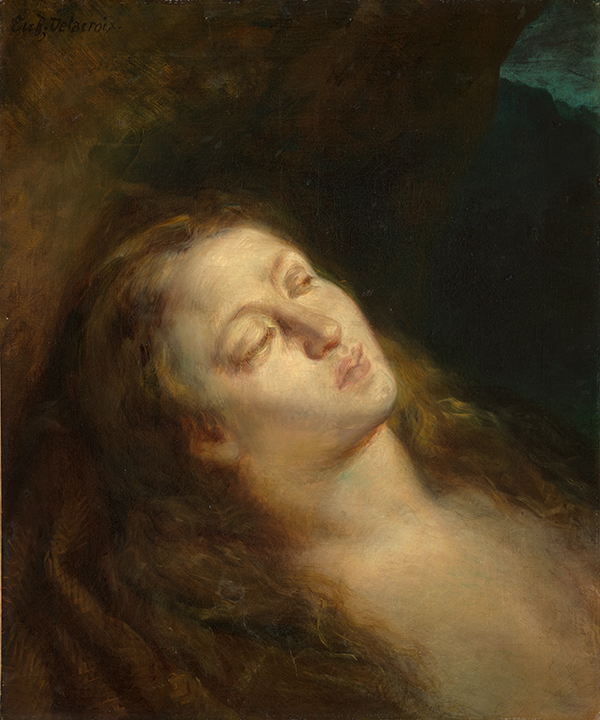 The splendid head of Mary Magdalene tilted back, with a strange and mysterious smile, and so supernaturally lovely that we do not know if she carries the glory of death or is beautified by the swoon of divine love.

Mary Magdalene in the Desert is one of the masterpieces of the museum’s collection. It is surely one of the most exceptional of Delacroix’s religiously inspired works, both for its composition and for the mystery that emanates from this woman, with her closed eyes and thick, sumptuous mane of hair. It was one of the works Delacroix chose for display at the 1855 World’s Fair.

A unique and unusual work

Ever since this painting was first exhibited at the Salon of 1845, it has made a striking impact; an unusual artwork that is in fact unique in Delacroix’s religious production by the emotional intensity that radiates from the figure with the enigmatic eyes and smile, a luminous apparition in Rubenesque tones against a dark and austere background.

One of Delacroix’s favorite works

While Delacroix had painted sometime shortly before 1845 a Mary Magdalene at Prayer (Oskar Reinhart collection, Winterthur) more similar in style to his other religious works, there is no question he attached great importance to this Magdalene, since he chose to include it in the brilliant selection of his works presented at the 1855 World’s Fair.