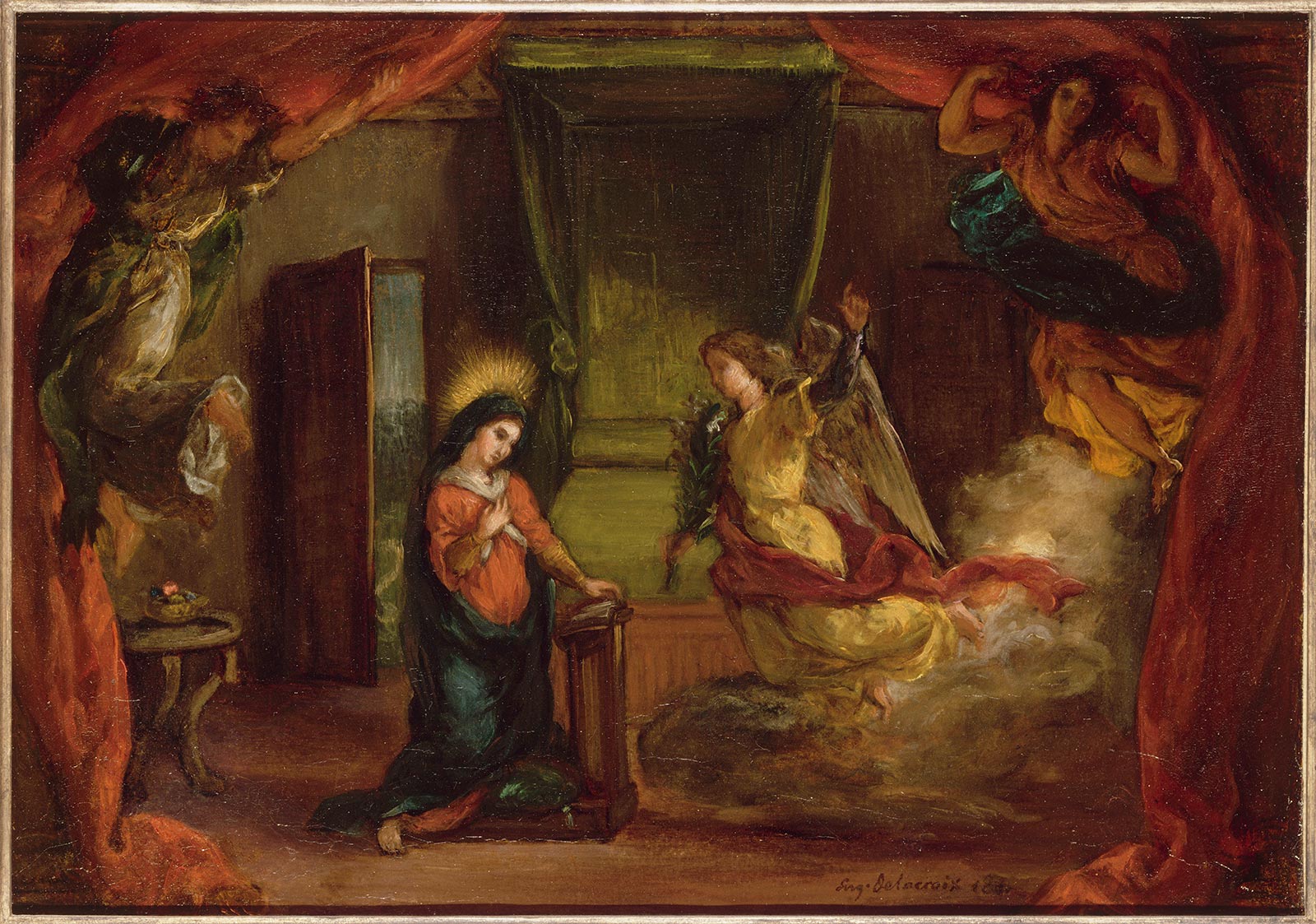 On June 4, 1840, after the withdrawal of painter Robert Fleury (1797–1870) who in turn recommended him, Delacroix was officially commissioned to paint an artwork for the Chapel of the Virgin in the church of Saint-Denys-du-Saint-Sacrement, on rue de Turenne in the Marais district of Paris.

Delacroix thus proposed two projects, an Annunciation—the modello can be found at the Musée Delacroix—and a Pietà for which he had a strong preference. The Musée Eugène Delacroix has seven letters regarding this commission, from the painter to Augustin Varcollier (1795–1882), who was Director of Fine Arts at the Seine Prefecture at the time. The letters describe the patrons’ demands and the difficulties the painter had persuading them to accept his idea. Despite the difficulties caused by very poor lighting, Delacroix finally chose to paint one of his most moving religious pieces, a Pietà inspired by the works of Titian.

Here Delacroix renews the image of this classic theme. Two angels—one gazing at the viewer—raise a heavy curtain that theatrically frames the scene. The limited colors, shades of red and green, are warm and deep. Only the angel and his cloud bring what would be an essentially divine light. The small door in the background that opens onto the countryside is rather strange and no doubt highly symbolic.

Baudelaire, who was a great admirer of Delacroix’s work, was not insensitive to this small painting. He discussed it in one of the three articles he published on September 2, and November 14 and 22, 1863 in the Opinion nationale newspaper after the painter’s death:I saw a little Annunciation by Delacroix, in which the angel visiting Mary was not alone, but ceremoniously conducted by two other angels, and the effect of this heavenly court was both powerful and charming.

Another cause for reflection is the fact that this little sketch was signed and dated. Perhaps Delacroix had signed it before it was given to Paul Baroilhet. When Baroilhet passed away, it entered the collection of E. Blanc in 1860, and then the collection of Victor Chocquet in 1862. According to Achille Piron, a childhood friend and appointed heir of the painter, Delacroix had painted another Annunciation in 1858.